“Why?” is a question I’m faced with a lot recently, partly because I have small children who tend to utter this word an awful lot, but mostly because explaining the “why” of research has never been more important. I’ve been meaning to write this post for some time now spurred on by recent events like the “Focus on Resilience” course I attended recently, the social enterprise workshops that I have been running and the numerous communication of research activities that I deliver either directly or with talented people like Piero Vitelli.

A couple of years ago I stumbled across a TED* talk from Simon Sinek entitled “How great leaders inspire action” and it really got me thinking about how the concepts he described relate to the world of research. Let me explain.

(* TED talks are addictive, you have been warned…)

In his talk Simon recounts how he noticed a pattern among inspirational leaders and/or organisations in the way they communicate; he cites Martin Luther King, the Wright brothers and Apple Inc. as examples of being very successful at inspiring action in others. What Simon Sinek did in a nice simple way was to reflect that communication process as a model which he calls the “Golden Circle” 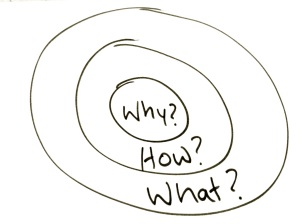 In the case of inspiring people, that order is reversed. They can clearly convey why they are doing something, is oozes from them in terms of passion, enthusiasm, conviction & belief. It’s their cause, the raison d’etre for doing what they do. The difference is that inspiring people understand what motivates them and are clear about the need to communicate that to others.

If we put aside the fact that Simon Sinek is a marketing expert and much of his work is around how organisations (corporate, charitable & military) should communicate to their patrons, the basic message can be easily translated into the world of academe. Let’s take the example of a typical presentation that you can think of at an academic convention or conference. They are usually pretty poor in terms of their presentation. Most will labour the what they do in minuscule detail and some will spend lots of time explaining the how, the methodology, the line of investigation that makes their findings more relevant or better than their peers. Yet the most interesting part usually comes in the last slide or two, the wider context, why this work is a valuable contribution to the field of study.

Imagine a world of academia where scholars spend the first few minutes of a presentation inspiring their audiences by demonstrating their passion and enthusiasm for the subject and, more importantly, attempting to make an audience understand why they should give a damn?

The lesson is simple, find your why and let others see it. That is what makes you authentic as a person, to have that clarity of direction and you know what? As a presenter it is what makes an audience care about what you say.

If you want to see a demonstration of an inspiring presentation from someone who is passionate about what they do and really works to make an audience understand why they should care then look no further than TED again (see I told you it’s addictive!) and watch Benjamin Zander. He is the epitome of authenticity.